The manifestation of a ghost suggests a deep psychic connection to a person, place or thing. While good art often reveals its sources, its quality does not come from an unquestioning reverence for spirits or the uninspired retelling of their tales. Honest work comes about when the maker knows he or she cannot outrun and therefore turns to confront these phantoms. The ghosts that haunt this project are many, and their stories predate the Time of Monsters.

Carl’s work has examined ideas and modes as diverse as the formal conventions of Mogul Miniatures and Fauvism, as well as the narrative compression in Sienese paintings. He often places the human form anachronistically in bleak or vaguely threatening landscapes. Lonely figures by one of the least lonely people you could know. Carl’s preferred medium, egg tempera on panel, is also about as old school as one can get. His work, The Hills Click & Wave, the Lake, Still, Creeps was a major impetus for this project.

Recently, Zack’s work has explored a more dimensional and textural approach to its abstraction. In the past he has drawn stylistically from Expressionism (German and Abstract), Art Brut, and graffiti while placing the human form into surreally suggestive urban landscapes. Uniquely his own, Zack’s obsessive all over technique allows alternative imagery to bubble to the surface only to disappear again into the depths - not unlike the hallucinatory effects of an Ivan Albright painting.

It was with these commonalities and juxtapositions in mind that Carl and Zack were asked to tackle the story of Anthony of Thebes. Worked by Michelangelo, Bosch, Grunevald, Cezanne and the writer Gustave Flaubert, Albright’s own take on the Temptation of St. Anthony was judged in a 1945 competition alongside versions by Ernst, Dali, Delvaux, and Dorothea Tanning. Today, Albright’s version is entombed in a nearby museum.

What if Carl and Zack were to approach this theme in 1:1 scale to that of Albright’s version? How would each handle the same amount of space, formally and conceptually, as this local bogeyman?

When St. Anthony removed himself to the desert, he erroneously thought that in doing so he would necessarily rid himself of the temptations of the outside world. But if temptation returns again and again, it implies that such enticements are in actuality the expression of one’s inner desires.

It follows that one’s desire to do good is also intrinsic. To do good, one must make good. Once the artist realizes that the promise of a richer life elsewhere is an illusion, he or she must resolve to make good right where they are. Nevertheless, it takes a certain kind to stay and make in this place, with the fantastical temptations of a something inherently better always advancing. In some ways the decision to stay and grind it out it also calls to mind Kierkegaard’s Knight of Faith.

In addition to other new works by Zack and Carl, Ghosts Don’t Burn includes installations and objects inspired by Flaubert’s own telling of The Temptation. Lauren, Nathan, Mariano, Karolina, Michael and Pedro play with the notions of seduction, opulence, obsession, repulsion, and resignation as they relate not only to our project, but to their individual practices as well. Like Carl and Zack, all make good through their connections to ghosts, art historical or otherwise.

Lauren, who devises obsessive color-mixing systems for her still life and landscapes, will also create in situ a new vanitas painting based on this installation. This work, also viewed as a performance of process relating to the themes in our show, will hang along with new works by all of the above artists in our December 2013 reinstallation of Ghosts Don’t Burn at The Gowanus Ballroom in Brooklyn, New York. -- 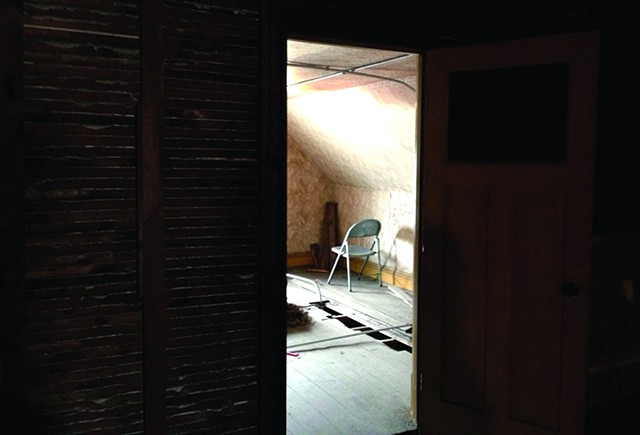 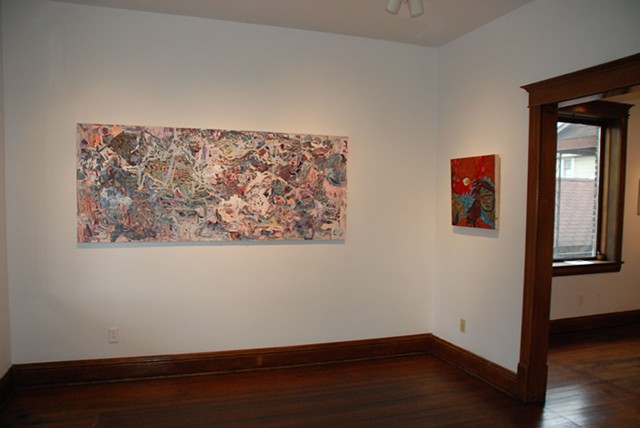 Left: 'Bear Witness, What He Saw Was, Beyond the Peaks and Valleys, More Mounting Mountains', Zack Wirsum, 2013 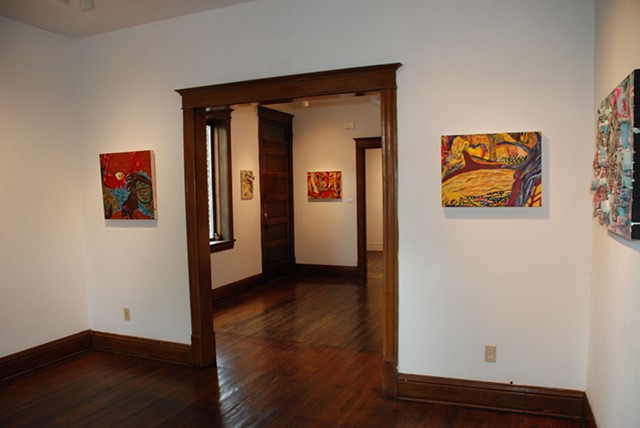 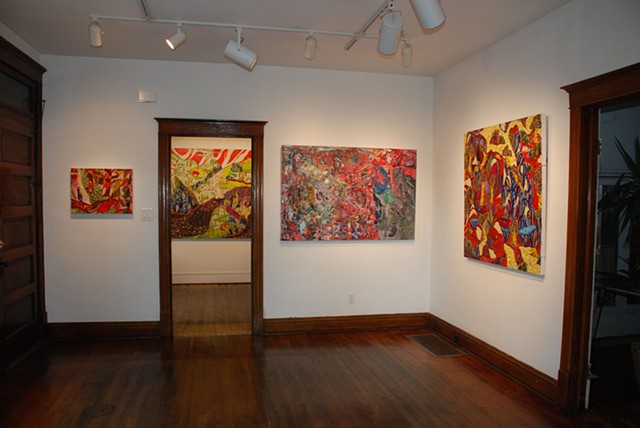 Center Right: 'History Unearthed, Under the Cloak of Darkness and Behind Closed Doors, We Reenact .....' Zack Wirsum, 2013 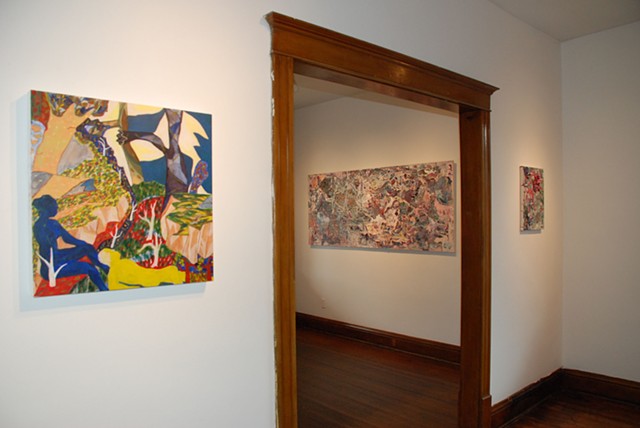 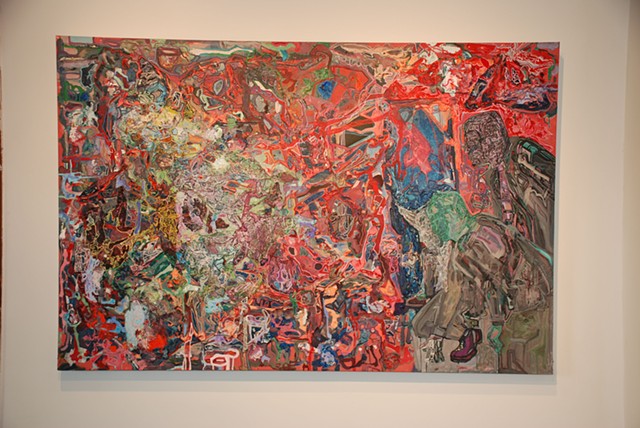 'History Unearthed, Under the Cloak of Darkness and Behind Closed Doors, We Reenact When It First Saw the Light of Day, Yet Again', Zack Wirsum, 2013 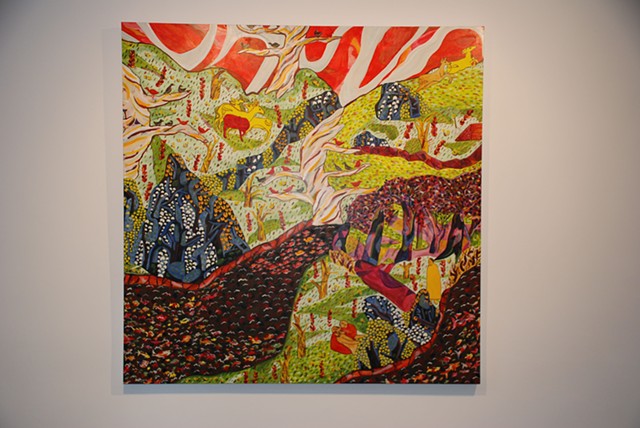 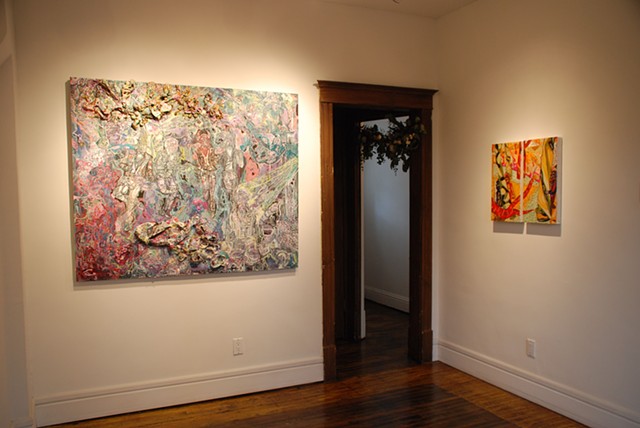 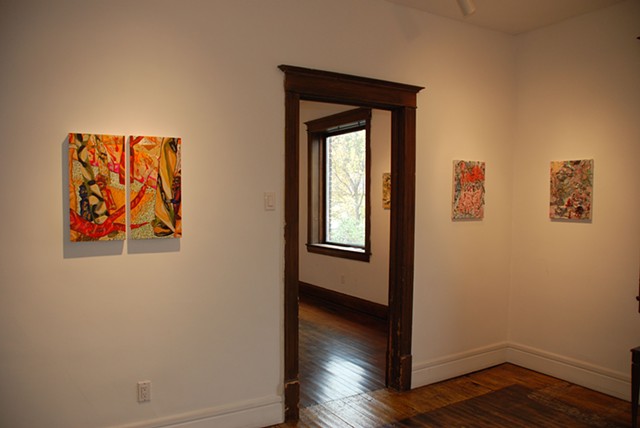 Center: 'Base Camp, At the Base Meant, It Was There Before Because', Zack Wirsum, 2013 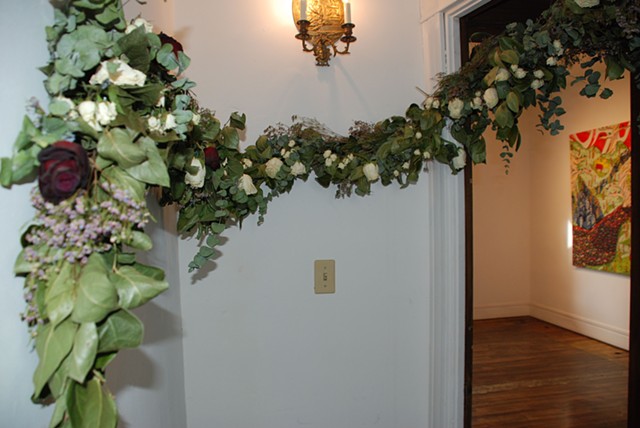 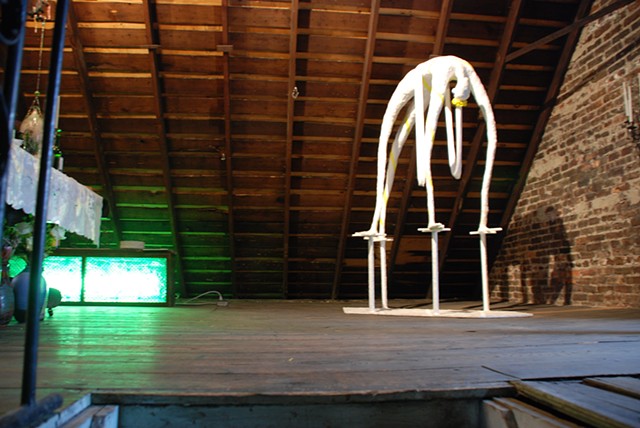 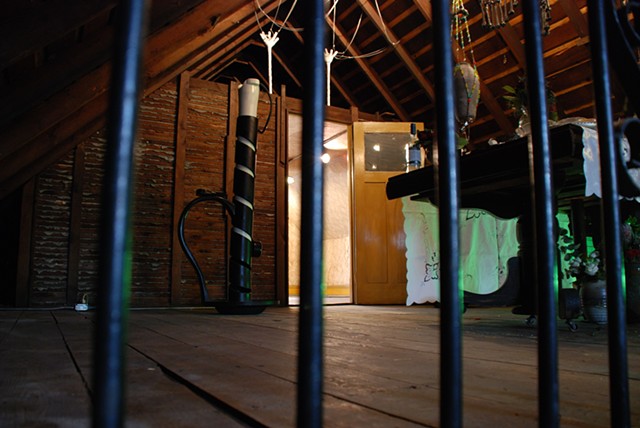 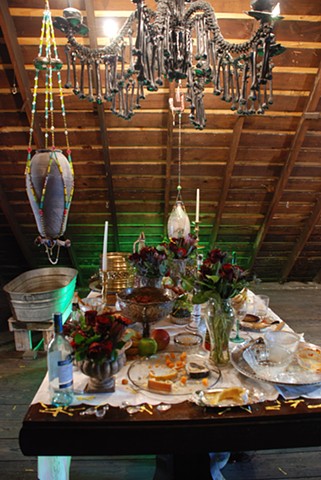 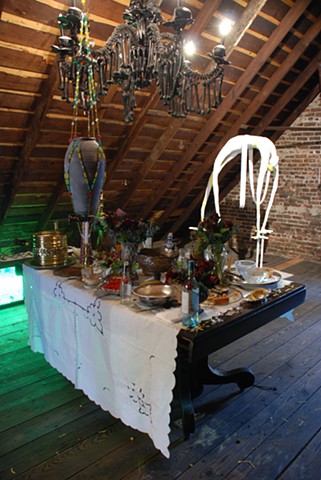 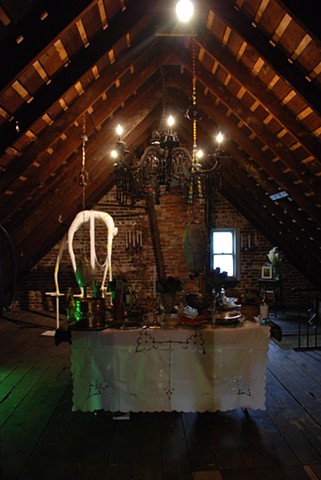 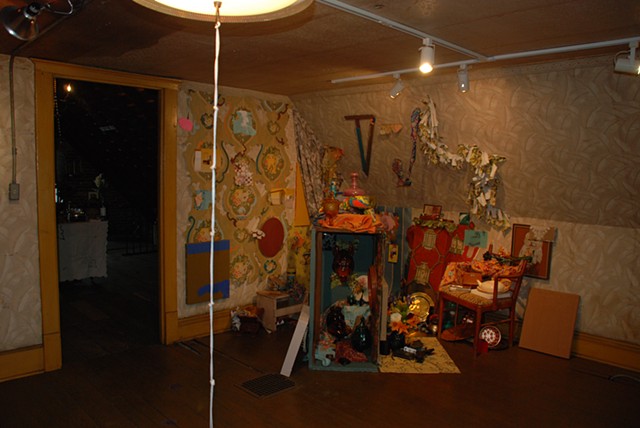 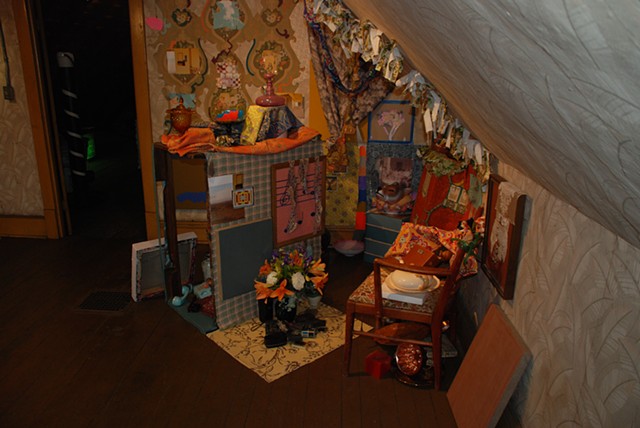 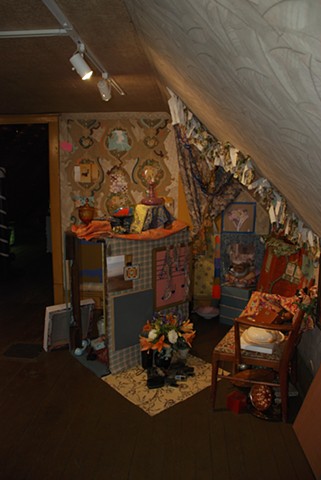 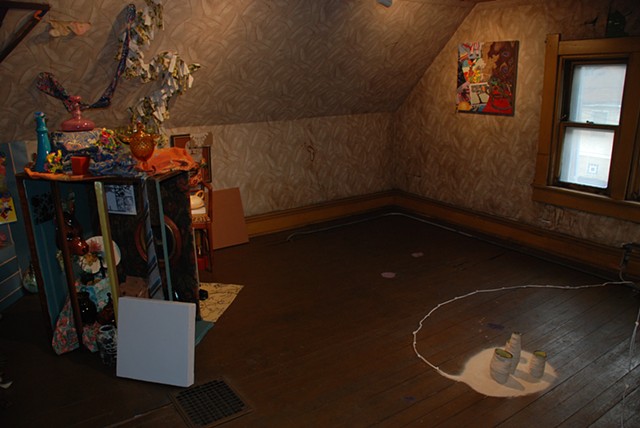 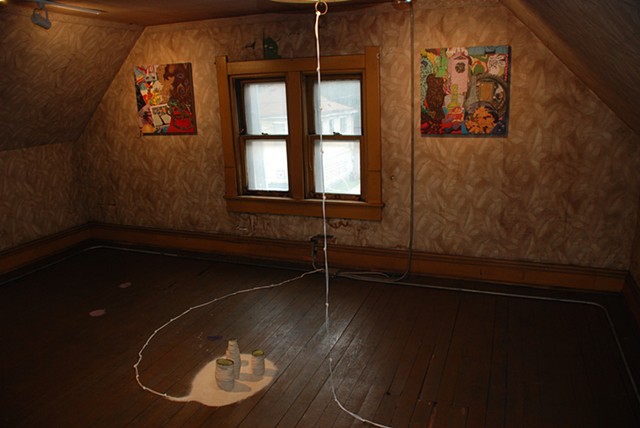 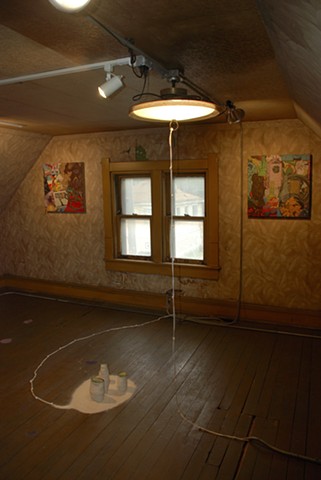 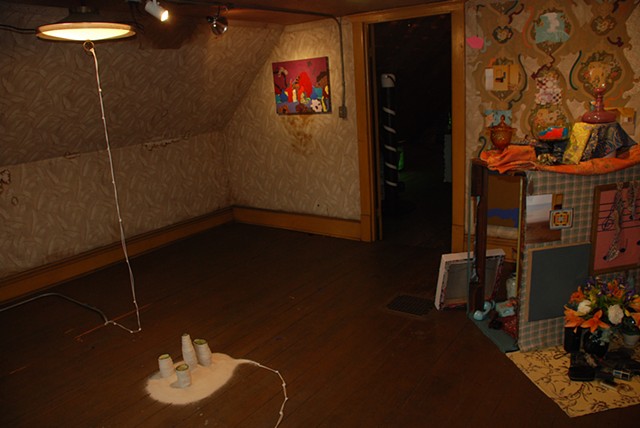 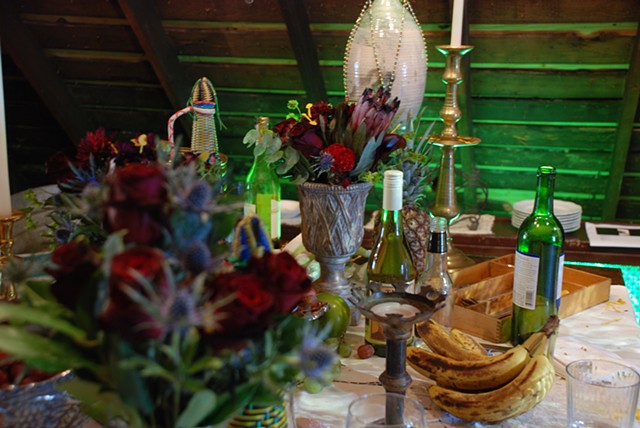