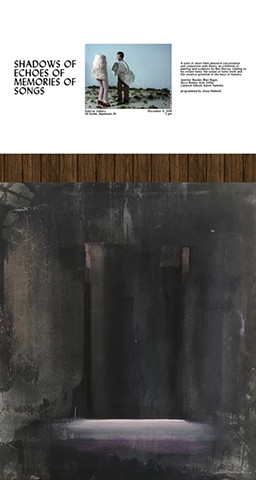 Gallery Hours through the run of exhibitions: Saturday, 1 PM - 6 PM and by appointment 'Annex' - Ben Murray

For over a decade now, Ben Murray has been making artwork about memory and the imperfections that arise in our attempt to recollect events and places as human beings in our daily lives. Annex will showcase a collection of autobiographical paintings and sculptures positioned on returning "home" since his move back to Northwest Indiana in 2017.

Ben Murray was born in Merriville, IN and currently lives in Gary, IN. He holds an MFA from the University of Illinois at Chicago and a BFA from the Herron School of Art and Design, Indianapolis, Indiana. He has exhibited at Cleve Carney Gallery, Hyde Park Art Center, Elmhurst Museum of Art and Gallery 400, Illinois; Bemis Center for Contemporary Arts, Omaha; The Armory Show, New York. He is represented by Monique Meloche Gallery in Chicago.