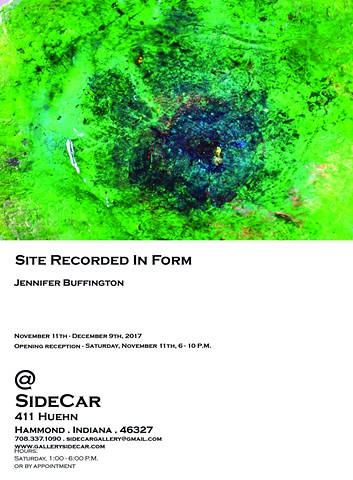 With this current group of works, Jennifer has been delving into the complex relationship that humankind has with the natural world, specifically the way we interact with landscape. We are 'in' the landscape. We manipulate and transform that landscape. We often attempt to record this interaction in some way and we are, ultimately, overwhelmed by our relationship with this world.

These pieces are 'recorded' bits of her experience traveling through the western United States; an attempt at re-imagining that landscape in form. The works are larger than the viewer, installed in groups that we must navigate through, just as we do when moving through the landscape itself. The formal relationship of the objects with the viewer and with each other is highlighted through form and scale. The context of the work radically shifts as our proximity to the objects changes. Initially, they are experienced as monumental forms. We are drawn in to them and we notice that there are colorful 'pools' contained in the tops of the sculptures. We are, from a distance, 'in' the landscape. Suddenly we are outside of that landscape, observers of a miniature fantasy world.

However, these are decidedly only parts of that landscape. The objects feel reductive. They are, after all, reproductions from a human beings imperfect memory. They are outcroppings removed from the surrounding majestic landscape, brought indoors. This fundamentally changes their context: The Great Outdoors is brought inside, tamed in a way.

These sculptures still manage to capture some of that majesty. They are based on forms that are created by the geologic forces at play in this world, forms built over great spans of time through the depositing of sedimentary material laid down over eons which are then sculpted by the process of erosion, forms that directly reference 'geologic time'. Jennifer's construction process mimics those natural forces, albeit in a severely compressed manner, building the forms up with layers of different colored foam, carving back into and revealing those layers. Geologic time seems to resonate in these works. But these objects are produced with materials used in human domestic construction, of a human timeline. The materials themselves will change in color and surface as they age and degrade. As these materials are specifically not archival, in an odd reversal of the geologic timescale, these works will quite intentionally be subsumed by the natural world.

This will be Jennifer Buffington's first solo exhibition with the gallery. She holds an MFA from Tyler School of Art, Temple University, Pennsylvania. She participated in the Billboard Art Project in Reading, PA, Atlanta, GA and Detroit, MI. She has participated in group exhibitions at Ice Box Project Space/Crane Arts, Philadelphia, PA and the Chicago Center for Green Technology and Heaven Gallery in Chicago, IL.

On Saturday, November 11th, -during the opening only- SideCar will also be hosting Jeffrey Michael Austin curated by Say Uncle!

About Say Uncle and the artist:

Say Uncle is an experimental residency and nomadic exhibition program based in Champaign-Urbana, Illinois. - Jeffrey Michael Austin is an interdisciplinary artist, musician and educator based in Chicago. -

'Site Recorded In Form' - Jennifer Buffington will be extended for one week, through December 16th!

There will be a closing reception on Saturday, December 16th. Be sure to see this exhibition if you haven't had a chance and please join us at the closing to celebrate the end of not just this show but 2017 as well!