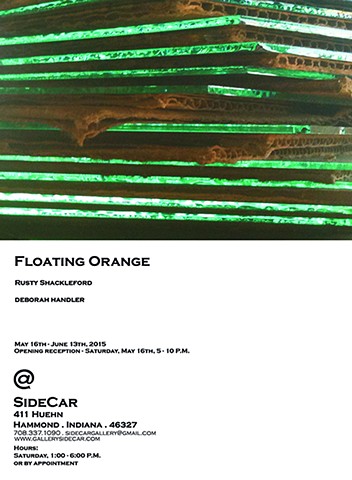 SideCar is pleased to present 'Floating Orange', an exhibition of digital prints by Rusty Shackleford and ceramic sculptures by Deborah Handler. This group of works is unabashedly steeped in materiality. They are luscious objects the the viewer can quite easily get lost in. But these objects are also constructed on a host of contradictions that one will overlook if too distracted by the overt sensuality on display.

The group of prints that Rusty Shackleford has presented to us start out as 'globs of paint on found images and the table of a flatbed scanner'. This goopy riot of color is then scanned at high-resolution, sometimes repeatedly, until the artist is satisfied with the results. We think of the scanning process is essentially reductive in nature but in this case, adds to the surface as well, with shadows cast by the scanners light and digital artifacts left by the digitization process itself. Against our expectations these surfaces are, in some ways, richer than the viscous paint that has been scanned. Rusty refers to these works as digital monotypes and this is what logic tells us they are but these things start out painterly and scream the language of painting even in their reductive, digitized final state.

Deborah Handler presents us with a group of objects that are, at first blush, very formal in nature. These are balanced, well composed and somewhat minimal forms. It isn't until one spends a bit of time with these objects that the irreverent, almost punk nature of these works bubbles to the surface. Knarly, pinched surfaces, goopy, splashily applied glazes on roughly assembled bodies are what we are actually looking at with the occasional bit of glazed-on kiln shelf used as a wedge to level some of the works. While Deborah knows of the history of ceramics, she is not tied to it. Her work arises not from the apprenticeship like process of studying ceramics, but from its exploration as a limitless material. She will use whatever method works for her to produce her work, regardless of whether or not that method is 'the way it's done'. She is fearless in her approach to a what can be a very unforgiving material.

Rusty Shackleford lives and works in Evanston, Illinois. His work has been shown at Gallery d, Chicago, Palitz Gallery, New York and Cindy Rucker Gallery, New York. He has been a resident at the Virginia Center for the Creative Arts, the Vermont Studio Center and Harold Arts. His work has been reviewed in Modern Painters, Beautiful Decay, New City, Flavorpill and the Art F City blog.