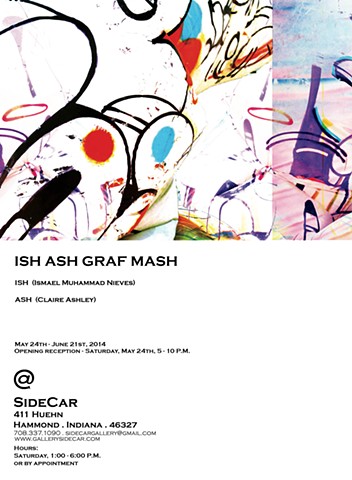 Ish and Ash were introduced to one another at the 2011 show 'Air' at SideCar featuring the work of Claire Ashley and Mark Booth. In 2013, they collaborated on one of Claire's Inflatables for 'Paint Paste Sticker: Chicago Street Art' at the Chicago Cultural Center. It was obvious that they should work together on something for SideCar.

Ish has been working for 3 decades, initially as a graffiti writer, he considers himself a post-graffiti artist and has produced both street and commissioned works. His work, evolving from graffiti culture, has recently been moving more towards collaboration as an art form, creating both meaningful work and extensive relationships.

Ash has been working with her inflatable forms as paintings, sculptures, installation and collaboration in the form of performance costume, as extensions of the body. For this collaboration she has attempted to turn the exterior painted surfaces of the inflatables inside-out, in effect surrounding the viewer with the intensity of the painted surfaces as opposed to filling the gallery space with a sculptural form.

ISH and ASH have subverted the gallery space, twisting the expected function of that space as a container for art works. In the same way as in Street Art, the vibrant rhythms and visual noise of the art and the building's architecture have become one. As a result, the walls and floor of the gallery have been covered with dense, brightly colored graphic marks. This overwhelming visual noise is responded to by ISH who has created an altar to the recently passed leader of house music, Frankie Knuckles. In the attic space Ashley and Muhammad present their first collaboration, "Blow Ups", a large painted inflatable sculpture. Opening Reception - Saturday, May 24th, 5 PM - 10 PM May 24th - June 21st, 2014