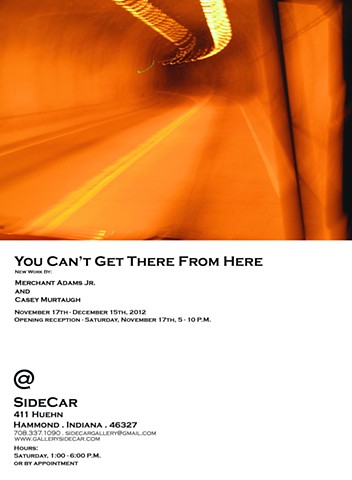 'You Can't Get There From Here' - Merchant Adams & Casey Murtaugh

Closing out the 2012 season at SideCar, we have two very distinct modes of production at play. On the one hand, there is Merchant Adams Jr. using a specific set of symbols, materials and actions addressing the onset of middle-age, manifesting its arrival in the male mid-life crisis. Merchant chooses the materials and symbols to work within a very deliberate art-production exercise, fully aware that the end result will ultimately be a group of objects for presentation. Those objects will be of a certain size with particular surface properties all reinforcing the subject matter at hand.

Casey Murtaugh starts from a different place entirely. There is no pre-conception of objects, only the notion that, at some point, whatever the results are, the objects she produces will be presented to the public. She executes a series of tasks or events collecting physical and experiential material, for use in the production of those objects. It is a fluid process with even the ideas surrounding the works under production mutating as her experiences and materials pile up on one another. Even Casey's end result is mutable, the 'finish' only visible upon arrival.

And yet, both of these artists, via differing means, have produced works of great power and subtlety. Now installed in the gallery their proximity yields up an intriguing and quite unexpected discourse. Modes of production, mark-making, materiality and the transformation of material, aggression and passivity, feminine and masculine; all of these subjects are touched upon with the objects themselves representing a purified decanting of the artists journey so far, the end of that journey never really visible from where they themselves are at any given moment. Ask for directions and they will tell you 'You can't get there from here'.