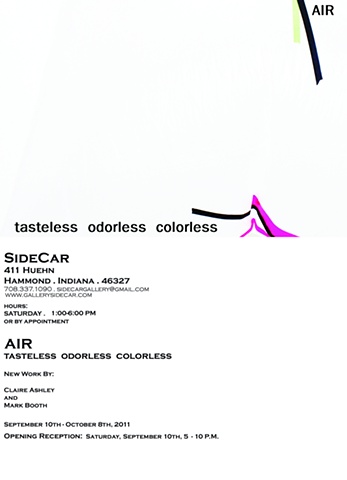 Historically and cross-culturally human beings have perceived the world to be made up of 4-5 'classical elements'. SideCar's exhibition schedule this year has been loosely based around this concept; artists direct their creative energy at the world and that directed energy manifests itself as one of those 'classical elements'.

Opening the Fall season at SideCar is "AIR: tasteless, odorless, colorless", an exhibition of new work by Claire Ashley and Mark Booth. These two artists have been friends since 1993 and this show marks their first opportunity to exhibit together. The artists present their work as a conversation with one another and the gallery space itself. The element “AIR” provided a compelling lens through which to consider that work.

Ashley’s work explores color and shape while eschewing traditional modes of painting, the resulting objects hovering somewhere between 'object' and 'image'. Her work relies on a mixing of aerosol paint in air, and is, in some cases, literally filled with air.

Booth’s work engages imaginative space and it’s atmosphere through texts placed directly on the gallery walls and his spoken language based works rely on breath and the transmission of sound in air. The work relies on suggestions, thoughts and free-association with meanings shifting depending on what the viewer brings, leaving us unsure of where the works itself begins and ends.

“I like to imagine that Claire Ashley’s work is the chimerical love child conceived by the union of Ellsworth Kelly, Richard Tuttle, and the CEO of Home Depot in which the reproductive apparatus of all three figures – transform, interchange, switch, switch back again, and produce from their joint fertile womb, a sea of floppy inflatable drawings, tape paintings, and fluorescent colored installations.” Mark Booth